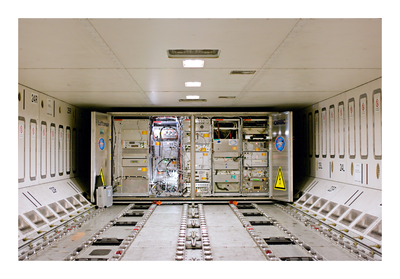 IAGOS-CARIBIC is part of the European Research Infrastructure IAGOS which operates instrumentation for atmospheric observations on board of passenger aircraft of commercial airlines. The project name is an acronym for 'Civil Aircraft for the Regular Investigation of the Atmosphere Based on an Instrument Container'.

In IAGOS-CARIBIC, a complex laboratory equipped with ~20 instruments is deployed in the cargo bay of a modified Airbus by Lufthansa during long-distance flights from Europe to many destinations worldwide. Around 100 trace gases, aerosol and cloud parameters are measured with the focus on an improved monitoring and understanding of many climate-relevant processes in the free atmosphere. Data are analysed by more than 800 data users worldwide, in particular for comparisons with observations performed on other platforms (e.g. satellite, research aircraft, balloons or remote-sensing systems) and the validation of atmospheric and climate models. IAGOS-CARIBIC is worldwide unique and collect high-precision, multi-component, long-term data that is urgently needed by many applications and that can’t be generated by other observing systems.

The rationale behind is simple. Measurements on board the CARIBIC passenger aircraft are inexpensive (only a small fraction of those for research aircraft) and can continue over decades. Indeed, since 1997 CARIBIC could collect a fairly representative long-term, high-resolution and multi-species dataset that is particularly powerful for studies on process understanding and quantification. Such passenger aircraft data thus nicely complement observations taken aboard satellites which result in a continental or even global picture, but at a spatially and temporally coarse resolution and thus lack in detail.

The cargo bay of modern passenger aircraft provides the perfect environment to operate big instrument payloads comparable to research aircraft. The CARIBIC laboratory (see picture) is connected via different (temperature-controlled) sampling lines to a multi-function air inlet system that takes ambient outside air. Sample air of up to ~300 l/min is quickly distributed to the different instruments. To the same time, the CARIBIC laboratory receives various data (e.g. position, pressure, temperature, aircraft data) from the aircraft and (with the new A350-900) will be able to downlink real-time data via satellite which can directly be assimilated e.g. by “chemical weather” models or the European Earth observation programme COPERNICUS.